Putting a Face on an Inanimate Object 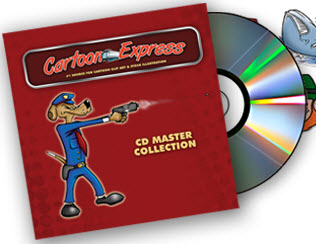 The great thing about the world of cartooning is that you can give personality to anything. The key is to add human characteristics to objects, including the way the object moves and how you make the object express itself. You can humanize any object by giving it eyes, ears, and a big mouth. By humanizing inanimate objects, you can create offbeat and unique cartoon characters to give your comic a life of its own. The next sections look at a few examples of how to draw and humanize inanimate objects.

In cartooning, you can take anything — such as a car — and make a talking character out of it. For example, Disney's very popular movie Cars took car models from all around the world and turned them into talking characters that acted and interacted just like people. The cars all had facial features and expressions created by incorporating the headlights and grill into a face.

✓ They have exaggerated movements that mirror human movements.

✓ Their facial expressions and features are incorporated into the existing car design.

✓ They have a friendly, cute look that gives them human appeal.

This basic form helps define the talking car and acts as a guide as you add details and definition.

2. Sketch in more details like the area for the roof and the driver's front wheel, as shown in Figure 9-20.

To draw the roof line, sketch a smaller square area on top so that it's centered between the two fenders. Next sketch the driver's wheel on the side of the driver's front fender by drawing a small circle on the character's right side. You can see the basic car shape begin to take form.

A talking car begins with a large, square box.

A talking car begins with a large, square box.

With the addition of more details, he begins to come to life.

With the addition of more details, he begins to come to life.

To do so, draw the three small half circles under the car. Don't worry about detail under the car; it will be blacked out. You can see that the driver's front wheel is in a more flexible position than a normal car wheel — more like an arm or leg you'd see on a human or animal character.

The wheels are substitutes for arms and legs for the talking car character.

The wheels are substitutes for arms and legs for the talking car character.

4. Add the facial features that substitute for the headlights and radiator grill, as shown in Figure 9-22.

To do so, draw the front grill as a large smile and the headlights as eyes. This really gives this guy personality! You can see that the front of the car has big, wide, friendly facial features using the car's existing parts and design. Add side mirrors, the interior roof line, and seat outline that will be blacked out.

To make your talking auto your own creation, add details like a funny front license plate or a missing tooth in the car's smile.

Cars aren't the only inanimate object you can bring to talking life in the world of cartooning. You can give appliances a speaking part in your cartoon universe, too — like the toaster in this section.

Keep the following in mind when cartooning appliance characters:

✓ Their faces are made up of buttons and switches.

✓ They're more amusing if their shape is stretched or squished.

✓ They're more appealing if you give them human characteristics.

Drawing the box helps you define the item and acts as a guide as you add character details.

Creating a character out of an appliance begins with a square box.

Creating a character out of an appliance begins with a square box.

2. Sketch in the facial details for the appliance character (see Figure 9-24).

The talking toaster begins to come to life.

The talking toaster begins to come to life.

3. Add any final details to finish off the talking toaster look, as in Figure 9-25.

Adding things like toast popping out the top and a dancing stick of butter next to the talking toaster makes for a delicious trio! Draw the accessories next to the toaster and have them moving outward to convey movement and action.

Now you have someone to talk to every morning at breakfast!

Now you have someone to talk to every morning at breakfast!

You can choose to further personalize this guy by adding other items to the drawing like a talking loaf of bread or a blender buddy.

One classic cartoon character that regularly pops up in children's cartoon shows, children's books, and animated movies is the big yellow sun with the smiling face. This is a prime example of a nonhuman object brought to life.

Incorporate the following when cartooning a big yellow sun:

✓ Round shape with lots of sun beams

When drawing the big yellow sun, follow these steps:

By drawing the basic round circle, you define the area of the sun character. The circle acts as a guide when you add details. Draw the horizontal and vertical guidelines so that you can center the facial features.

To do so, begin by drawing the U-shaped sunbeams around the sun so that they're evenly positioned around the sun but don't touch it. You can begin to see the circle look more like the sun.

Adding wide eyes and a toothy grin gives the sun a warm, appealing personality. He's wearing sunglasses because it's just so bright outside! Sketch in the glasses by centering them on each side of the center guidelines.

4. Add a friend like a cute little star or cloud.

To draw additional celestial objects, start by drawing a star or two. Feel free to add as many clouds or stars as you want to keep the sun company. As you do, be sure and give them all happy faces to create a big, friendly universe!

sun begins with a nice, round circle.

The sunbeams are making this sun come to life.

The sunbeams are making this sun come to life.

The smiling sun has buddies to keep him company in the sky.

The smiling sun has buddies to keep him company in the sky.

Easy Draw, How To Draw Animals Step by Step, The Art of Cartooning and Illustration, Drawing Objects, Cartoon Images